Teenage Mutant Ninja Turtle: Out of the Shadows Review: An underwhelming sequel 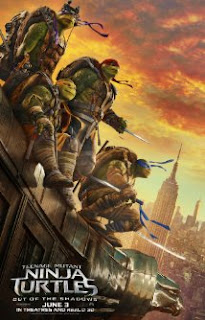 Teenage Mutant Ninja Turtles: Out of the Shadow is a super hero movie mainly just for the kids -- it was fun and entertaining. Nickelodeon Movies is the studio behind the Turtles and did a good job portraying the cartoon to this live action. It's also the sequel, so if you haven't seen the last one you might be a little lost but not too bad. Check out our review of the prequel here to catch up

The Turtles save the city of New York during the night as in the title "out of the shadows" because if they are seen during the day they fear that they will not be accepted and may even be hunted. The leader of the four brothers is Leonardo (Pete Ploszek), the brains is Donatello (Jeremy Howard), the muscle is Raphael (Alan Ritchson), and the dumb one but with a big heart and youngest of the bunch is Michelangelo (Noel Fisher).

Each one helps each other out and without teamwork they really begin to fail. They also have human friends and one certain gorgeous lady is April O'Neil played by the lovely Megan Fox. Although she is good to look at, she did not really contribute much to the film but has gotten better since her last couple movies. Another new addition (if you watch the CW's Arrow then you will recognize Stephen Amell) who plays Casey Jones, a correction officer dreaming of becoming a detective. Together, they are a team not to be messed with.

The plot of the movie is that the Shredder (Brian Tee) has escaped from prison through a transfer and when the Turtles fail to capture him they fear the city will be in chaos again. They battle it out against Shredder and his evil forces (and at one point make the decision to turn into regular humans) as well as a new villain by the name of Krang (Brad Garrett). In my opinion Krang was pretty much worthless and Out of Shadows would have been better without him but other than a few things like that this movie was okay. It's not one I suggest seeing in theaters. If you're not a fan of the Turtles wait for Redbox or Netflix