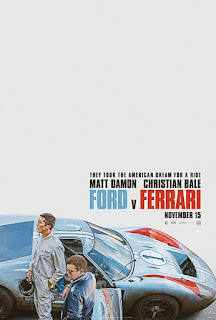 Have you heard of a race that legit goes for 24 hrs straight? If yes, then you surely knew more than I ever did. In 1966, ford faces off against a monster (Ferrari) and it takes a lot of trial and error to even have a chance of overcoming and winning that tremendous feat.

Pros: This movie is going to be in my top ten this year and the reason being is the story and acting was superb! You get a lot of heavy hitters and Christian and Matt are two that hit it out of the park. I do not believe they've ever been in a movie together but they make a great tag team and if they decide to do another one down the line I'll be there. Historically I knew Ford is a godfather in the auto industry but I didn't know Ferrari outclassed them in the racing portion, as seen in trailers Matt's character, Carroll Shelby wants Ken Miles (Christian bale) to race but Ken laughs and mentions a timeline of when that could happen, in 2 or 300 years but Carroll says 90 days. This whole movie is not just about being in the car the whole time but creating a car capable of lasting 24 hrs non stop besides quick pit stops of course, and fixing a lot of failures towards that objective. I also liked how the owners and staff were involved and with having so much power, greed and pride were also a factor early on when they failed in the early stages.

Cons: This movie was well balanced out and don't have too much to say negatively. Maybe more facts before the credits rolled would have been a little nicer. We do get a few but they could have added 2 or 3 more facts of the events and people involved.

If you want to see an entertaining movie but also worthy of an Oscar contender, do go see this film and I know you'll walk out loving the story it tells. Car enthusiast or not, it's a good ride from start to finish.